Jeff Hanson took up art at age 12 as he started to lose his sight, and has managed to raise more than $1 million for charity.

Despite Jeff Hanson’s visual impairment, he uses bright colors in an abstract form. His favorite color is purple.

It would’ve been easy for Jeff Hanson to mourn at the tender age of 12 when doctors discovered an optic  tumor that helped explain why he was losing  his vision, but the soon-to-be philanthropist had a better idea.

He became a self-described “accidental artist” showing others how he saw the world with vibrant illustrations, first on note cards before moving to canvas paintings and later to designs for women’s dresses. Seven years later, with roughly 1,300 paintings under his belt, Hanson has reached a goal originally set on his 19th birthday: to reach $1 million in donations for charities by the time he was 20.  He did it with time to spare, reaching the mark at the annual Make-a-Wish Gala in North Texas earlier this year.  He turns 20 on Sept. 30.

“I thought it would be good to give back to the world and not use it for myself,” the Overland Park, Kan., man  says. He points out the effort was never actually

about the money, but the help it would provide. “My art makes people happy.”

A large portion of the funds were raised by donating paintings to more than 100 organizations including Make-a-Wish Foundation, the Children’s Tumor Foundation and Children’s Mercy Hospital in Kansas City. Hanson and his family also make sure to keep a small portion to support Jeff and his business, Jeffery Owen Hanson LLC, created by the time he was 17.

David Williams, CEO of Make-a-Wish Foundation, says there are many young philanthropists and former Make-a-Wish kids like Hanson who use their condition and sometimes even their wishes to make a difference.

“You almost have to look deeper into some of the wishes that are granted,” he says. “So often there’s a lot more to it.” 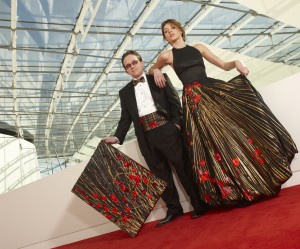 Make-a-Wish kids must have a long-term illness and be nominated by physicians. Jeff qualified after being diagnosed with Neurofibromatosis  and optic glioma. The Hanson’s renamed the condition CLOD ,a bully that would be made fun of, beaten down and defeated.

“You can pick the pity path and be disabled forever,” says Hal Hanson, Jeff’s father. “Or you can redefine yourself and find your passion. Focus on what you can do instead of being the kid down the street with the tumor.”

Neurofibromatosis  is a genetic disorder, making it easier for kids to develop tumors typically along the nervous system or under skin. In rare situations, like Jeff’s, the tumor grows on the optic nerve and is treated with radiation and chemotherapy in extreme cases. The tumor in combination with treatment left him legally blind, able only to vaguely see shapes and colors.

Alan Gamis, Jeff’s doctor and the chief of oncology at Children’s Mercy Hospital in  Kansas City, says though a cure doesn’t exist yet, advancements in treatment have been made.

“It’s a complicated disease and it can affect many parts of your body,” Gamis says. “In general, our families get over the shock within the first couple of weeks and become fighters. Some do so at a much greater extent, like the Hanson’s.”

Jeff no longer has the tumor and he doesn’t let the threat of resurgence bog him down. Because of his can-do attitude, he has traveled around the world, met the likes of Elton John and Warren Buffett, and received many awards including Prudential’s National Spirit of Community Award in 2012. His work has sold collectively at auctions for roughly $46,000 to $68,000, and his hand-painted dresses have even made it to the runway.

“We were just sitting at a lemonade stand (seven years ago) … and I was actually crying because I thought that’s all we could come up with,” Hal Hanson says. “Jeff wasn’t supposed to be an artist. This is so surreal that I just don’t even know how to interpret it.”

Jeff already has a few more projects up his sleeve including painting a Porsche for the tumor foundation’s program, Racing4Research at Daytona in 2014, an inspirational tour inspired by his father’s book Lessons from CLOD and hopes his dresses will make it to the red carpet.

“He’s always doing the right thing and it gets him into the most amazing experiences,” says John Risner, the president and CEO of the Children’s Tumor Foundation. “But it’s his long-term commitment to philanthropy that’s rare.”

The Hanson’s plan to continue their work, but will take a quick celebratory break in September and later lighten up the workload, spending more time on larger projects.

All thanks to CLOD, Jeff says. The family’s dream bank is finally overflowing.

“It was a very unlikely place to find inspiration,” says Julie Hanson, Jeff’s mother. “I used to think it was luck and then I decided we’re just blessed.”