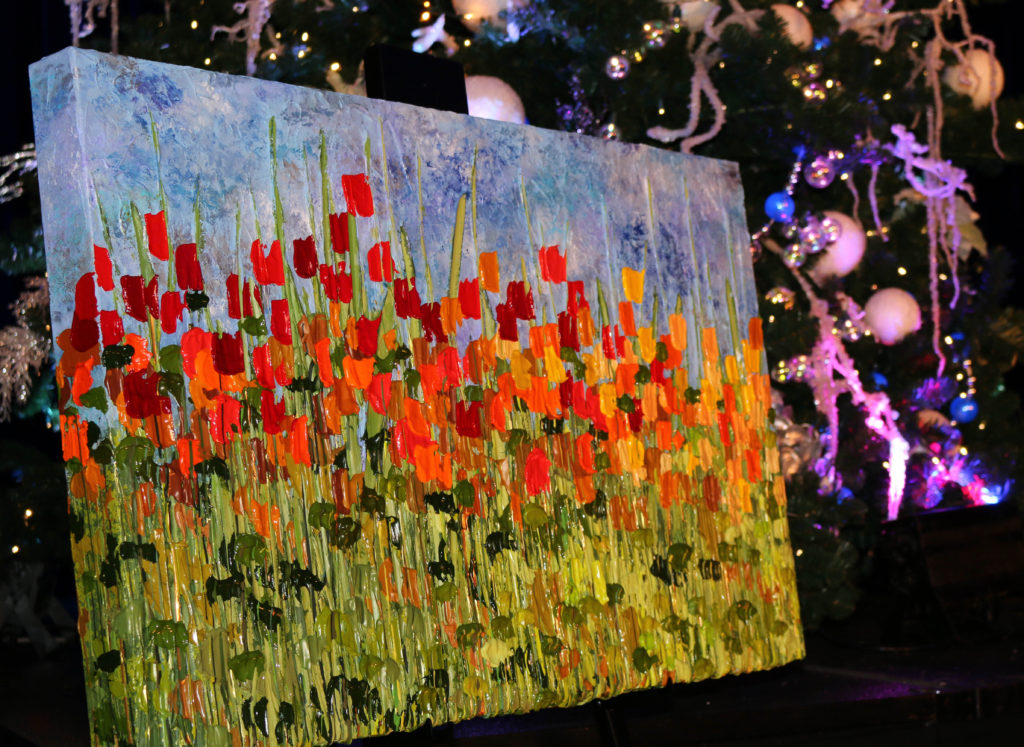 Jeff Hanson, a 24-year-old visually impaired artist who has a goal of raising $10 million for children’s charities by age 30, is much closer to his goal after raising $100,000 in November. 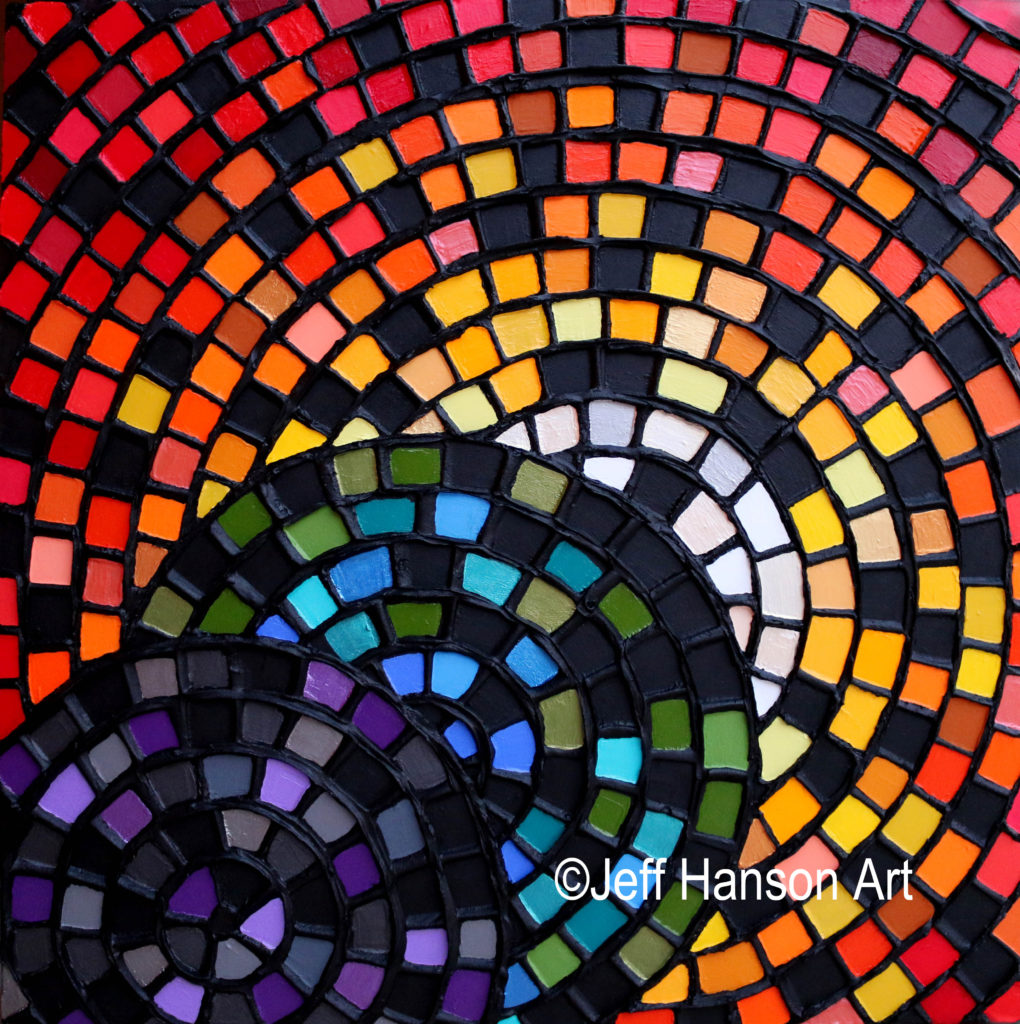 Download the image above and update your social media profile picture with Jeff Hanson Art, “Moondance,” (nod to Van Morrison) for Eclipse Week. “Moondance” by Jeff Hanson Acrylic on Heavily Textured Canvas 36″ x 36″ x 2.5″ “Moondance” was inspired by the total solar eclipse of August 21, 2017. The painting title is a “shout-out” to […] 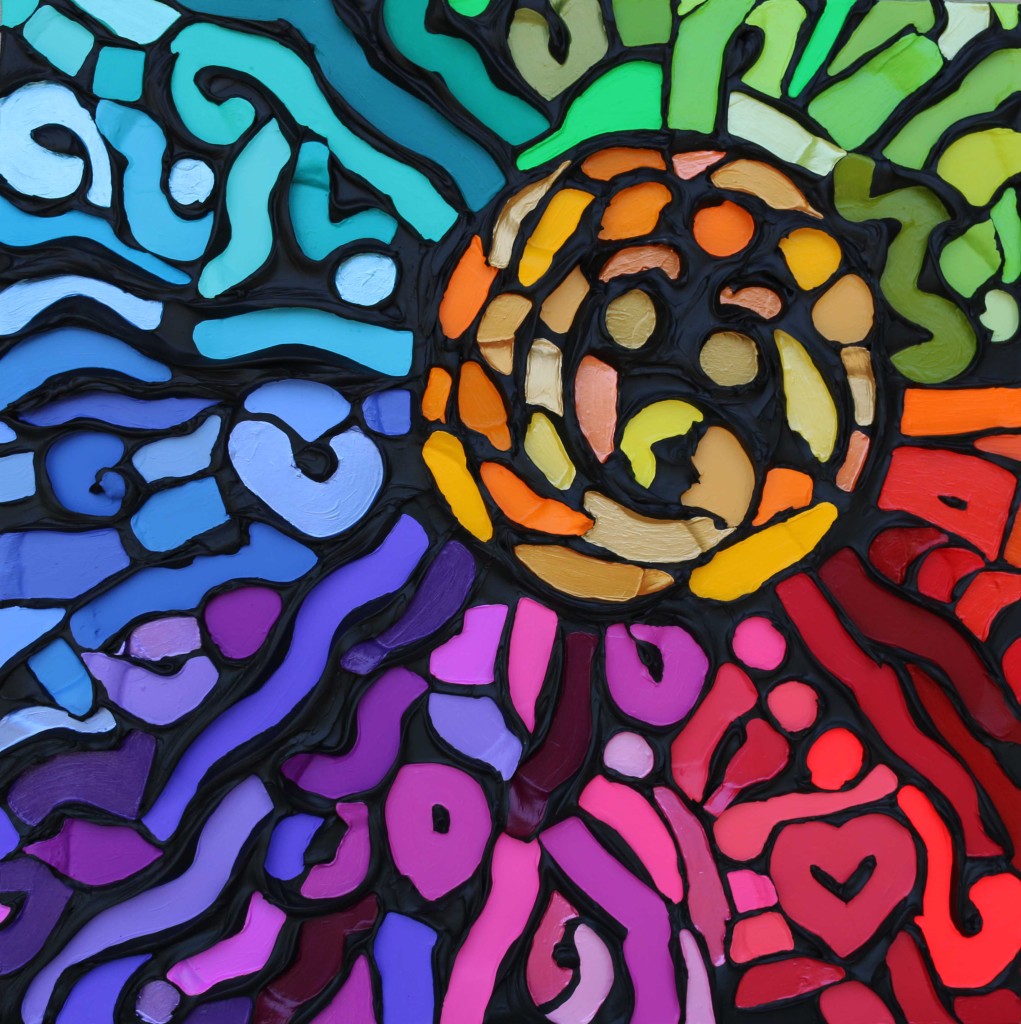 Though an optic nerve tumor nearly blinded Jeff Hanson, the 17-year-old hasn’t let the condition interfere with his creativity or determination to help others, CNN reports. Jeff started painting and crafting note cards while undergoing radiation treatment, and in the five years since his diagnosis, Jeff has donated more than $350,000 from the sale of […] 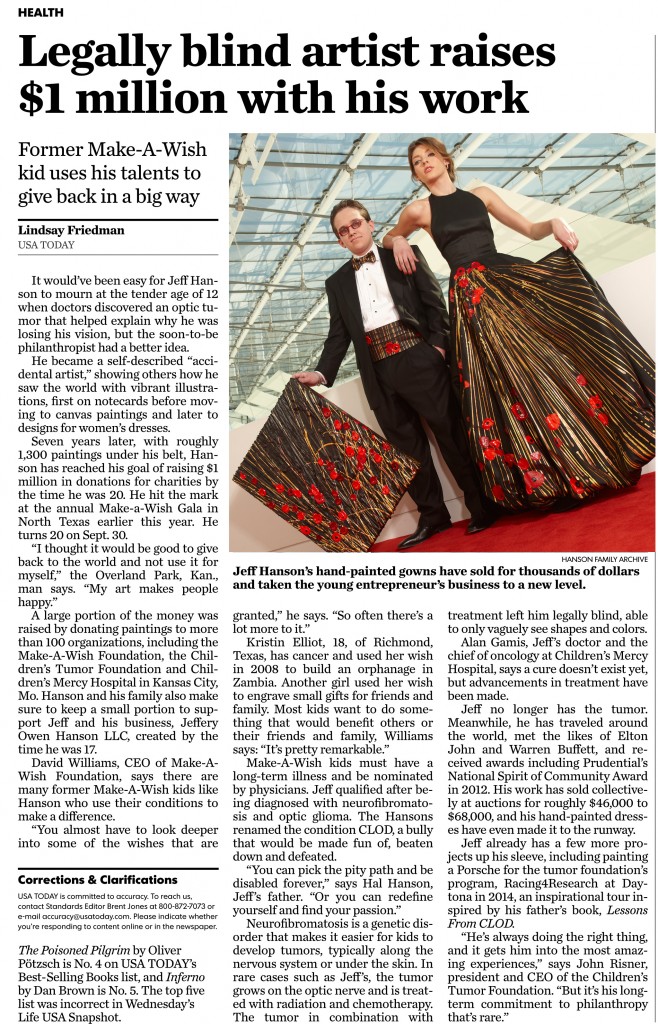 Jeff Hanson took up art at age 12 as he started to lose his sight, and has managed to raise more than $1 million for charity. Despite Jeff Hanson’s visual impairment, he uses bright colors in an abstract form. His favorite color is purple. Story Highlights Doctors diagnosed Jeff Hanson with an optic tumor when he […] 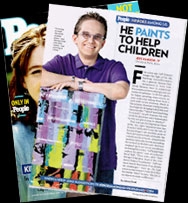 Five years ago Jeff Hanson fought the fight of his life. Battling neurofibromatosis, a genetic disease that threatened to leave him blind, Hanson, then 12, underwent five months of chemotherapy and six weeks of radiation.  To lift his spirits, he began painting watercolors on note cards and selling them from a card table in his […] 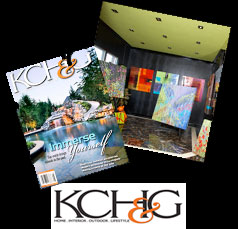 The Hanson house in Overland Park is literally a work in progress. Not in terms of renovation or remodeling, but rather a vibrant rotation of original art that frames a dynamic and fluid interior. Seventeen-year-old artist phenom Jeffrey Owen Hanson, the family’s youngest member, has a hobby-turned-career that punctuates every surface of the home. Jeff […]

by Natalie Angley To view this article on CNN’s website, click here » (CNN) — At 12 years old, Jeff Hanson was struggling to see the world around him. “He was walking off curbs and falling down staircases because he couldn’t see that they were there,” said his dad, Hal Hanson. Hanson had been diagnosed […]

Sign up to receive our e-newsletter to stay connected, and you can look forward to receiving information about new products, special offers, and upcoming charity events.

This website uses cookies to improve your experience while you navigate through the website. Out of these, the cookies that are categorized as necessary are stored on your browser as they are essential for the working of basic functionalities of the website. We also use third-party cookies that help us analyze and understand how you use this website. These cookies will be stored in your browser only with your consent. You also have the option to opt-out of these cookies. But opting out of some of these cookies may affect your browsing experience.
Necessary Always Enabled
Necessary cookies are absolutely essential for the website to function properly. These cookies ensure basic functionalities and security features of the website, anonymously.
Functional
Functional cookies help to perform certain functionalities like sharing the content of the website on social media platforms, collect feedbacks, and other third-party features.
Performance
Performance cookies are used to understand and analyze the key performance indexes of the website which helps in delivering a better user experience for the visitors.
Analytics
Analytical cookies are used to understand how visitors interact with the website. These cookies help provide information on metrics the number of visitors, bounce rate, traffic source, etc.
Advertisement
Advertisement cookies are used to provide visitors with relevant ads and marketing campaigns. These cookies track visitors across websites and collect information to provide customized ads.
Others
Other uncategorized cookies are those that are being analyzed and have not been classified into a category as yet.
SAVE & ACCEPT